Remember when you were a kid and the years crawled by at a snail’s pace?  You would bemoan your perception to one of advanced years and they would say “Just wait.  One of these days you will wish it would slow down.”  In response you would think “yeah right”.  Well those days are here for us at TredWear.  2017 flew by!  We had so much to do and so little time.  That’s okay though we kicked butt and got things done.  Like these blogs.  That’s right we are keeping our promise and just blogging away. 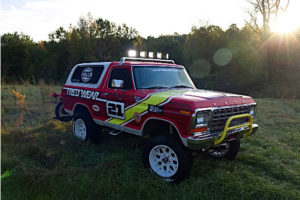 Our friends at Hella wanted to showcase our Bronco in their SEMA booth.  So first things first we had to outfit that puppy with some awesome lights.  The photos just don’t do these things justice.  Brighter than the Sun, (well maybe not that bright) but very bright.  Here is a link to the install video.  https://www.youtube.com/watch?v=zZ17aF73W4U  As you can see in the video the installation is easy and the lights really finish out the look of this beast.

Most of October was spent getting the Scottsdale SS ready for the show.  We knew that a complete color change was ambitious, especially in the time that we had to do it in.  However, when we approached the guys at Wilson’s Paint and Body they said no problem.  The last widebody flair was finished by the first week of the month and so with fingers crossed off to paint the truck went.  Wilson’s choose AkzoNobel paint supplied by Byrd’s Automotive supply for the project.  When Jeremy (owner of Wilson’s) said “No problem” on the deadline I must admit we had our doubts.  However, one business week later, the paint was done!  We really couldn’t be happier with the results. 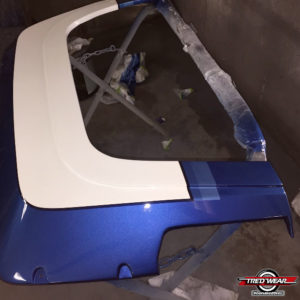 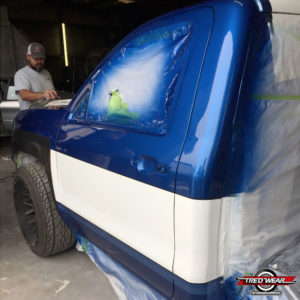 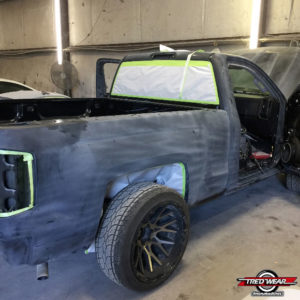 Next item on the list was performance.  You just can’t have a truck that looks like this without having something serious under the hood to match.  What should we do?  The answer was supercharge it.  Time was short we did not want to mess around with a kit that was not tried and true.  And because none of us can speak much less read chinese we did not want to go with a “value” kit.  MagnusonProducts.com fit the bill.  Our friends at Ozan Speed said this was the easiest performance installation they have ever done.  The instructions were clear and concise.  Every step was covered and nothing was left out.  If you are looking to supercharge something we highly recommend Magnuson.  After the installation we had to retune the truck and Avid speed was the best for that job.  The rest of the Scottsdale SS build will be detailed in an upcoming feature blog. 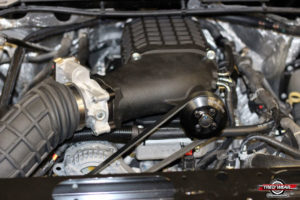 Just the logistics of getting everything out to SEMA is a huge undertaking.  The cars are loaded up on multi decker transports.  The booth and materials are boxed up and shipped.  Support staff flies out on coach 2 days before and the Owners flyout first class the day of the show.  Oh…… wait we aren’t a fortune 500 company.  No we make every dollar count.  That means we load up the rig and a couple of tow vehicles and haul everything out.  Once our rig fires up it does not shut down till we are just outside Vegas.  The only stops we make are for fuel.  So far this has served us well.  It is also a very beautiful road trip.  Since we have to have the rig in position Saturday morning we leave on Wed. afternoon.  That gives us at least one buffer day for any problems. 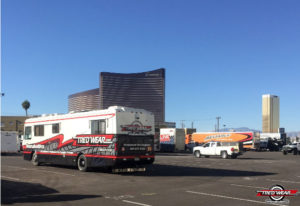 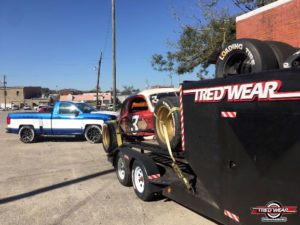 SEMA 2017!  Finally.  All that work and preparation is bearing fruit.  This year was even better than last year.  There were 4 Battle of the Builders contestants in our booth. 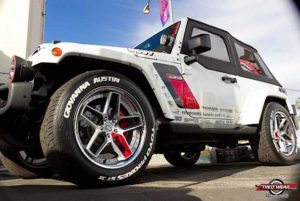 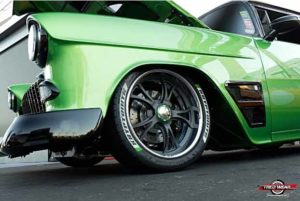 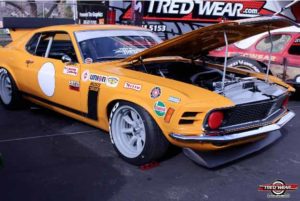 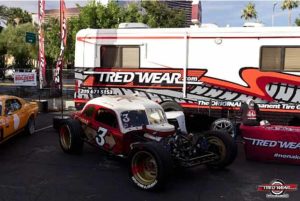 What was the common theme?  Our permanent tire graphics.  These guys didn’t want stickers on their tire.  At this level of competition only the best will do.  We were also fortunate to have the Assassin Motorsports GTR and Josh Baggett’s widebody Mercedes in our booth.  We also want to thank Alan Daniel, President of Arizona Head Turners for bringing out his super sweet Camaro. 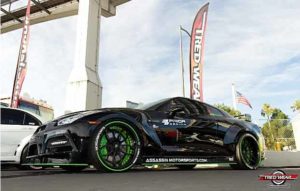 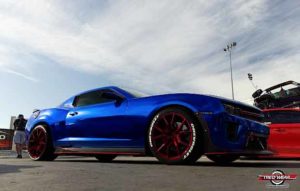 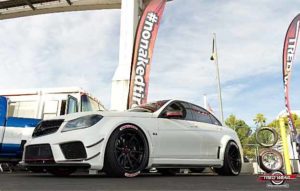 After the show we made the long track home and thanks to our team we made great time.  Once back we took a little time relax and spend some time with our families.  It is a real blessing to work in this industry and we are extremely thankful to our creator for the opportunity.

A great part of the month is spent on next year’s build, the SuperDaytona.  Ozan laid out the framework and mounted the body.  We purchased a refreshed R1 cup car motor for the project and it looks awesome.  The guys didn’t waste any time on installing this jewel.  We are really excited about this project and believe we have something special with this one.  Stay tuned for a feature blog dedicated to this build. 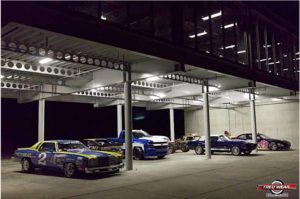 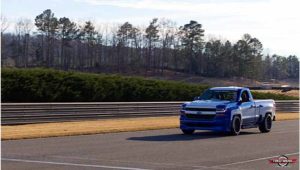 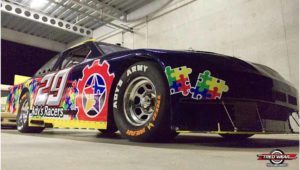 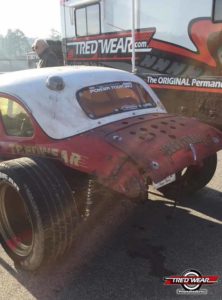 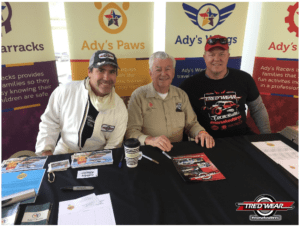 We were also invited to bring out some of our “race” cars for a local charity event held at Barber’s Motorsports Park. The charity is Ady’s Army and their goal is to take care of the extra things families with special needs encounter in life.  So we spent a Saturday taking kids around the track in our vehicles.  Unfortunately during practice laps Tarantula got away from us and hit the wall (stay tuned for video).  Then the clutch on our #2 Monte flew apart.  That left us with the Scottsdale SS.  With the Chicanery widebody kit and the wide tires the truck was planted.  It was amazing how well it handled.  At first the truck felt like it pushed a little.  However after the tires warmed up the general consensus was the vehicle was very neutral in its handling.  It should also be noted that we did not have high performance tires on the truck and it was still amazing.  The entire weekend was a blast.  The smiles on the kid’s faces alone made it worthwhile.  We also had the opportunity to meet NASCAR legend Bobby Allison. 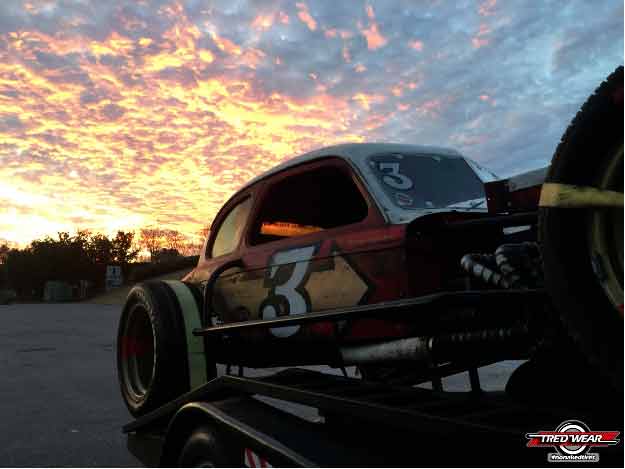 That brings us to the end of 2017.  What a year!  We hope you enjoyed it.  Keep checking back with us.  We are going prove our office manager wrong and blog on a regular basis.

If you have any suggestions or just want to be a troll please feel free to enter it below!

What will fit on my tire? Calculate Below!

EX: 245/45r20 -245 is the width expressed in mm -45 is the aspect ratio/height expressed as a percentage and -20 is the wheel diameter (not needed below)" *Disclaimer The biggest customer mistake is to try and order letters that are too large. This calculator is to determine if the sizes we sell will fit your low profile tires. On larger tires a 1" to 1.5" graphic will look most appropriate. The only exception is on vintage race car tires that are very tall or large trucks.

One kit required per tire, unless specified on the product page.