If you’re reading this and you didn’t know there was a part one you should stop and read part one first.

As stated in part one we are turning over a new leaf by keeping this blog fresher than grocery store sushi. Also our office manager said that we wouldn’t keep it going. Mainly just to prove her wrong we will keep this up.  So without further fluff or contrived wit let us continue the year in rear view.

April 2017.  Spider eyes and Dancing with the star

How did “Tarantula” get it’s name?  It is obvious when you look at it now but when we started out we just wanted an open wheeled car with big meaty tires that would be street “legal”. In order to meet that last wish list item we would need some headlights. We didn’t want any old headlights though. The lights had to be special, something trick, and Hella USA had the answer. 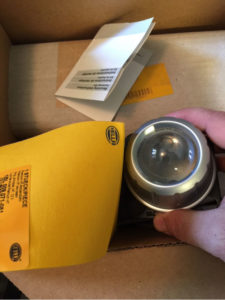 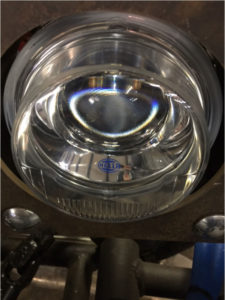 The next question to answer was what are we going to do with the front suspension?  The front bridge was such a mess and needed to be replaced. Let me just stop.  This sounds a lot better than it reads so long story short we put the headlights in the new bridge and boom!  The car looked like a spider. 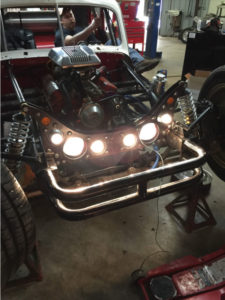 We are car guys. We love cars. We do not watch shows about dancing celebrities. Don’t have time. But when Noah Galloway, former contestant of Dancing With The Stars and national hero asks if you will letter up the tires on his challenger you say Yes. 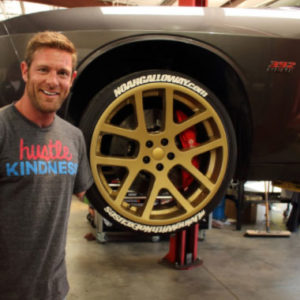 Of course installing TredWear increases your HP (that’s a lie).  Noah brimming with new found confidence because of the TredWear installed on his tires, (that’s not true either) took the day at the drag strip (He did very well). 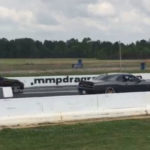 May started off with being pulled over by the local police. While the officer did think our tires are cool that’s not why he stopped us. 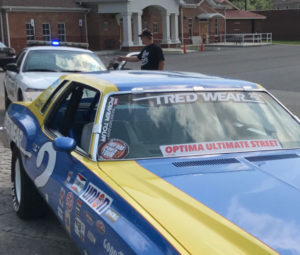 It seems that the rest of May was consumed with getting Tarantula and our team ready for the Hot Rod Power Tour.

If you watch car shows you get this warped perspective on what goes into a build.  At the beginning of the show they find the project.  Commercial break.  Tear the project down.  Commercial break.  Reassemble the project with sponsored cool stuff (with some major problem that is handled in 35 seconds, and the boss is talking about how he is going to lose his shirt on this build).  Commercial break.  Then the reveal, everyone is smiling except for the guy/gal that is so emotional about the car.  Start to finish: the build took less than 22 min.  The “reality” shows miss the mark.  Builds take time, lots of time.  Sometimes the direction you wanted to go in changes.  Sometimes the car speaks to you just as turn the shop lights off and you turn the lights back on, then you start cutting and start changing everything you just did.  The fact is it is amazing to finish a project in a year.  Now this is not to toot our own horn but we finished Tarantula in roughly 6 months.  It surprised us because every nut and bolt on Tarantula had to be taken apart.  Of course Tarantula was not finished by just one person.  There was a great team behind this project.  We are going to do a blog completely devoted to this build in the coming weeks so I won’t go over everything in this one.

One of the items we had to address on Tarantula was the paint.  The previous owner had painted the car but it was not “finished” and it only looked good from 30 feet.  We wanted a paint job that would fit the car.  So we hand painted the car and then distressed the results.  Check out the before and after. 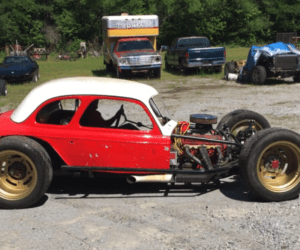 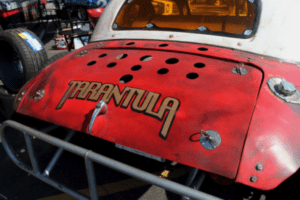 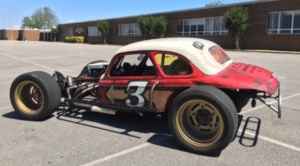 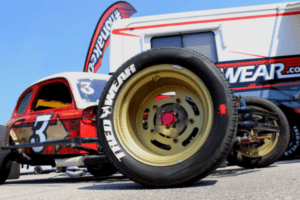 Half the year is gone and it is hot. Not kinda hot. We are talking sweaty nasty hot.  We got pulled over ……….again.  This time the officer was questioning the legality of Tarantula being on the street.  After going over the car he was convinced that we had our Ps and Qs in order (for the most part).

2017 Hot Rod Power Tour.  For those who are not familiar with the Hot Rod Power Tour, every year Hot Rod Magazine puts together a week long, 7 City, tour that features more than 6,000 cool cars and not to mention awesome companies like TredWear. So, if you can you should definitely come out for next year’s tour.  The HRPT makes SEMA feel like a cake walk.  It’s hot.  Things break.  No sleep.  It’s hot.  Plus, you have all of the trappings that go along with SEMA but you drive, setup, tear down, and drive again.  Did I mention that it’s hot?  So why do it?  Aside from the benefits of promoting TredWear.com we have made some great friends on the HRPT.  It is great to meet our customers and talk to them.  And let’s not forget all the awesome cars!

The Hot Rod Power Tour is where we decided to debut Tarantula.  It is one thing to feel like you have something special, but when you have people consistently come up to you and say “This is the coolest thing here”, you KNOW you have something special.  It was great!  Especially considering the company it was in.  The cherry on top came when Brandan Gillogly, the Feature Editor for Hot Rod Magazine, came up and asked if he could shoot the car.  To say we were honored was an understatement.

That brings us to the end of part 2.  There are of course all sorts of things going on in the background.  Updates to equipment.  Orders flying out (we offer same day shipping on most orders).  Also, the Chicanery brand is coming along nicely.  In part 3 you will see the finished C5 corvette kit we developed and our next Chicanery widebody project.  Not to mention SEMA preparations and other cool stuff.  So check back with us next week for more fantastic blogging excellence. 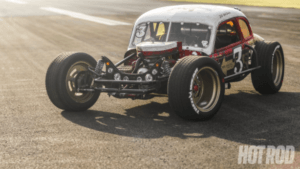 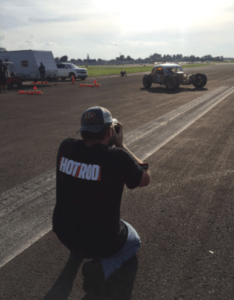 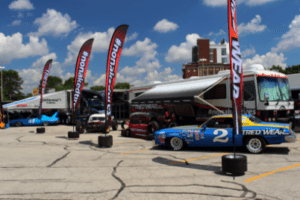 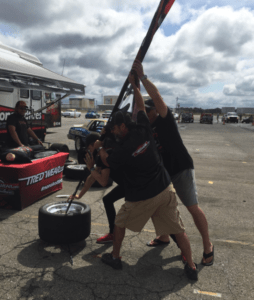 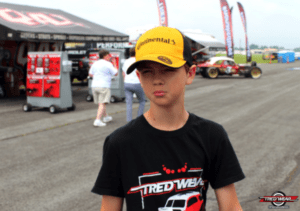 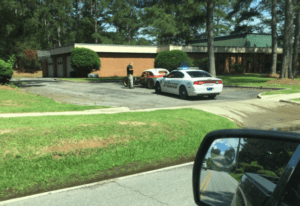 What will fit on my tire? Calculate Below!

EX: 245/45r20 -245 is the width expressed in mm -45 is the aspect ratio/height expressed as a percentage and -20 is the wheel diameter (not needed below)" *Disclaimer The biggest customer mistake is to try and order letters that are too large. This calculator is to determine if the sizes we sell will fit your low profile tires. On larger tires a 1" to 1.5" graphic will look most appropriate. The only exception is on vintage race car tires that are very tall or large trucks.

One kit required per tire, unless specified on the product page.